I plied the whip hard this week and the painting drone finished three decent minis. First up is an ogre from the pile of miniatures to paint for friends. I had fun painting this Ral Partha miniature, it has its own personality. The stripey pants were something I have been trying to do for ages. I think I am getting the hang of it. 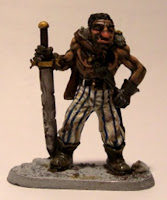 Since I had the colours out, I went ahead and finished a hill giant/ogre I had started many months ago. The same layering techniques were used as described for the previous ogres and halflings. In this case I used fewer layers and Citadel Colour "Dwarf Flesh" as my lightest colour. This created the ruddy skin look. An red areas were done using the GW ink washes (Yes I cheat, but the results show well). 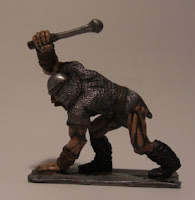 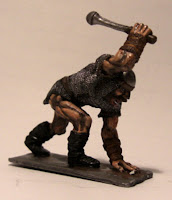 Even though I was on break this week, the painting was tiring me out, so I switched over to an old stand-by green flesh. Since I have had much practice and the right colours (dark: Citadel Foundation Orkhide Shade, light: Citadel Colour "Goblin Green") this was an easy miniature to paint and help pad out my miniature count. 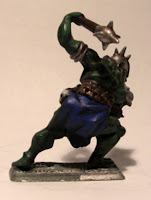 Finally, I have some Battlefront Indian Pattern Carriers for Flames of War. The carrier on the far right is a command vehicle and unarmed, while the remaining vehicles are part of a carrier recon platoon. I actually completed these vehicles round week 38, but never got around to posting.

This little painting experiment was partially successful. The majority of weeks had new postings. Personally I did not paint as much as I hoped. In fact, I did not meet my main goal, which was to finish painting the figures my friends had given me to paint (I have had some for several years!) The weekly deadline is too tight for me considering my laziness, which got the better of me once I started playing video games again (man, Fallout 3 is addictive). I'd like to keep this painting log going. I will make one change; the minis displayed each week will not necessarily be painted during said week, but some time before the posting and January 1st, 2011. This will, hopefully, allow for my bursty painting schedule, other gaming, the various mundane demands of life and the life changes (welcoming a baby boy!) in the upcoming year.

Cool Mini New Year to everyone

I hope 2011 is a productive year for everyone and that you all keep safe and well.

As I had time I thought I'd do this. Originally I had intended to do this in a lot more detail. But as it is the lesser quality of the available Dreads I decided to not go crazy on it. I have a huge project that I have been working on which demands doing it right, so not taking this one as far as I was going to ended up being fun.

I did it in purple, my first idea was blue, but didn't have the blue I wanted and I have not done purple really so it was something new. I tend to do Green and Blue a lot. What normally happens is it takes me a while to finish a mini and it might have been heavily green, so I think hmm what I should i do now. I know something blue. Finish that and think its been a while since I did something green. Then I look at my shelf and see blue green blue green.

The flash isn't my friend and it does bleed out the colors some. Dry brushing around the edges and shins. Added dirt and black smoke around the stacks and guns. The battlegrey shows as blue in the images for some reason. Not the best camera.

I had a blast doing this challenge and I really didn't think I was going to finish it with the target number of one a week. I am very happy I did.

I am more than happy to see this blog continue. Though not as a challenge. I think we all need a bit of a break from that. Though I would not mind doing a six month challenge in the later half of this year or another year one for say 2012. I'm open to that. But for 2011 if we want to use this as a forum to post our finished stuff and chat like we have then that has my vote.

The Dread will be my last for 2010 as my other project will not be finished as I am waiting on paint to come from Hong Kong. I wish all you a great holiday and a cool 2011

Aaron
Scallywag
Posted by Unknown at Saturday, December 18, 2010 No comments:

Week 51: No more will I paint today you with

This has taken me six months on and off as I was involved with other projects and time crisis etc. 72mm tall Luke Skywalker and Yoda as seen during Dagobah. No more will I teach you today. It was fun overall and I love the sculpt. 72mm is hard to work with as you can't hide mistakes and this one has more than I'd like. Its my third 72mm but my first with so much skin. Learned a lot and will do my next one very different I think. Not just in painting but also in construction. I think the way I normally like to do it just is totally wrong for these larger scale mini's. While I think I can do better now I am still happy with how it looks.

So this was a huge experiment for me. I don't play any of the mini games, but as a Role Player I can dig them and feel that we are all gamers whichever we are doing. Having said that I have never painted army style. As I never had to. My mini's when I am happy with them sit on display on my shelf. I spend much more time than the average gamer does on his, but that's only because of necessity from both sides. A display mini takes longer, but if I was building an army and painted it in my usual way I would NEVER finish even a 500pt army. So as an experiment I thought I'd try doing a unit. I chose a bunch of Mantic games skeletons and sat down to work on them as if I would be doing them for play.

Now I don't know how other people do it. If I had to give it one word I would say: Methodical. I did it in stages. Stage 1 assembly, stage 2 first color on all of them, stage 3 second color on all and so on. If I was use one word that wasn't involved with this little experiment would be: fun.

OH MEIN GOTT!!!! was this boring. Doing it in such a methodical manner took all the creativity out of it for me. I had a production line. I know some GW players who hate painting. I can understand if this is how they did it.

i am happy I tried this style as it was not something I have done and I have new respect for dudes like RAF who can paint a group of mini's for a unit and not only do they not suck but they are pretty cool.

Now the race is on for me to finish 2 more by midnight Dec 31st. In my typical retarded way I am doing a GW Dreadnaught and finishing off a 72mm beastie.
Posted by Unknown at Friday, December 17, 2010 1 comment: 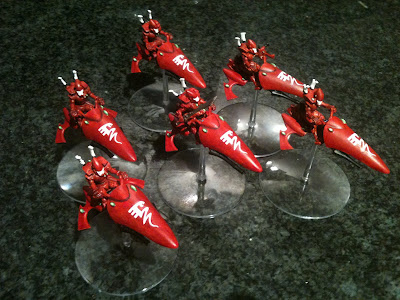 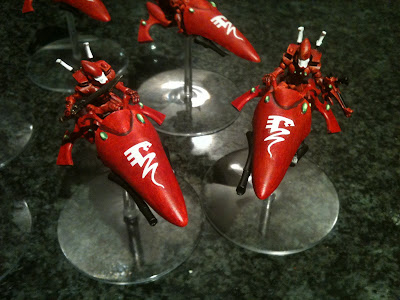 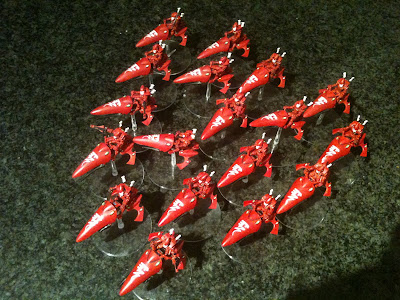 Finished 6 more Guardian Jetbikes today, with this my ultimate goal of 18 total troopers on bikes is complete. Final photo shows the whole 18 of them together in all their glory! Same conversion on the two Shuriken Cannon bikes (second pic) where I just chop off one side of the gun and glue it onto the other side - basic but effective.

I think this will likely be my last update this year, it's been a real pleasure blogging with you all and seeing everyone's painted stuff. Scallywag's recent military models have been a great change of pace to see in particular!

I realize we kind of went off the rails of the whole model-per-week thing but I think between the lot of us we generally managed at least one post per week or so, that's some kind of achievement for sure!

Karl, do you think you'll keep this blog going in the new year?

Merry Christmas to everyone out there (or Happy Holidays if it's more appropriate to your own situation!) and have a fun New Year!
Posted by The Raf at Wednesday, December 15, 2010 1 comment:

This is a 1/76 scale British Mark 1 Female tank. This was in many ways a war winner. Offering protection and being able to crush the barbed wire lines and engage the enemy trench. The partner to this is the Male, which was armed with canon. The Female with MG's. The tank revolutionized war and the Allies completely failed to exploit their creation.

This is a Airfix kit and it had no serious issues. It was a quick and fun build. I added a lot of silver drybrushing and then dirt.
Posted by Unknown at Friday, December 10, 2010 1 comment: 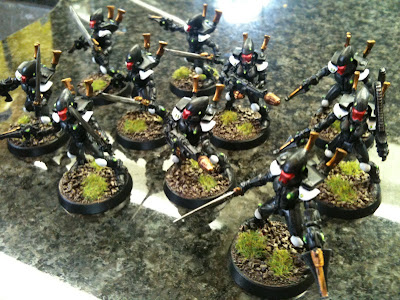 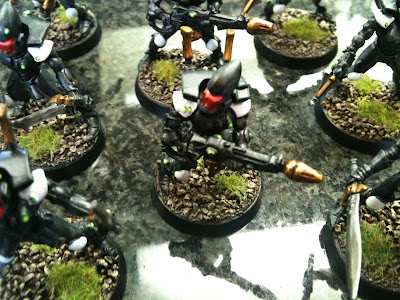 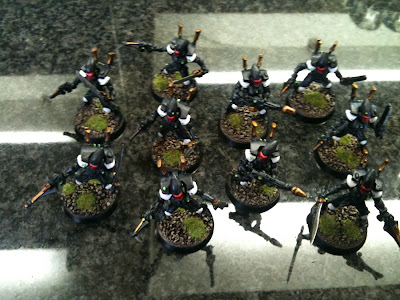 Got some mildly converted Storm Guardians for you today. I used the regular Guardian bodies and heads combined with the actual Storm Guardian kit weapons. GW in its infinite glory of course only actually gives you 6 pairs of pistols 'n' swords (plus the two melta/flamer sets) so I used Dire Avenger Exarch pistol-esque arms and a couple of Wood Elf swords to model the last two needed. I painted them to look more commando-like than my regular Guardians...wishful thinking perhaps. Similar to the standard GW scheme but with my own additions of white and gold for a twist. Hope you guys like them!.

By the way, I also recently started a video channel on Youtube where I post battle reports and vids looking at my individual painted units: http://www.youtube.com/user/EldarCorsair

It's young but I've already got three battles posted and a bunch of my models, expect more as it grows!
Posted by The Raf at Friday, December 03, 2010 1 comment: