72mm Fett. Took a while to work through and there were some tricky parts to deal with here and there. The mask was one.
Posted by Unknown at Tuesday, June 28, 2011 1 comment: 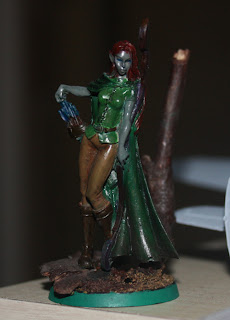 My latest. A 54mm Dark  Elf...kind of. Was nice and easy to work on. Couple of things I`d work on a little more with her, but overall I am happy with how it looks.
Posted by Unknown at Friday, June 17, 2011 No comments:

This was done in a day. it was done for a D&D Rpg game to represent a character. I didn't spend anywhere near as long as I normally do. For what it is and for a reaper mini it isn't bad. Did pale elf flesh but as usual if I am going to complain about something on it I will say flesh. its the stuff that just straight out pisses me off. getting a smooth skin finish is just hard for me.

i tend to like knights. big hunking helmet wearing, no skin showing tin men. Otherwise this mini is ok. not amazing, not remotely near show quality, but for its intended purpose its ok. It was also fun to do just something more frivolous and not be stressed about its outcome.
Posted by Unknown at Tuesday, May 03, 2011 No comments:

This one has been ongoing for a long time but got it done last night. Was cool to paint, had lots of fun doing it and this one had no real issues to deal with. bargain all round.

Despite real life and home renovations I did manage to get some more tanks completed.

The Punisher tank is pretty heavily converted (the gun is from the much newer demolisher kit as is the front heavy bolter etc.) The Demolisher is a stock build save for stowage etc.

Blogger doesn't seem to want to upload photos from Flickr today but there are lots of tank shots at the link above! I'll upload them manually when I get home.
Posted by Senekal at Thursday, April 14, 2011 No comments:

My first for the year. This was for another challenge. Though only for a single model. The theme had to be anti-shipping aircraft and this Junkers Ju-88 fit that requirement. The Junkers was an amazing plane that filled a bunch of different rolls. From bomber, anti-shipping and even as a huge heavy fighter when they fitted a bunch of canon to its nose.

This kit was not a fun one to build. The molds for this kit are 40 years old and over time the process causes them to deteriorate. GW will be facing this problem as well at some point. With the molds being so old the fit quality is well gone. Nothing fitted right, parts were to big or to small. A nightmare. I have included 2 pics one overall and the other a closer up image of the weathering I did on the fuselage. I have two big figures to do this year.

A Question about Ghosts...

Later this year I will be working on a large 1/32 P-51 Mustang fighter. It was called Cripes A Mighty and its pilot was a leading ace with the 352nd Fighter Group. George Preddy had more than 20 planes shot down which is a decent feat for Allied pilots. German and Japanese who were not rotated home had a lot more.

He was killed by friendly anti-aircraft fire which mistook him for an enemy aircraft in 1944.

So here is the thing. As he died violently I don't want to be flippant with how I handle the kit and the mini of him. The mini is a very cool one of him sitting on the rim of the cockpit of his fighter. I am seriously tempted to paint the mini as a ghost as artistically that might look really cool. I have never painted a ghost before, but I know some of you guys have painted water/air elementals which share some characteristics with a ghost kind of painting techniques. I obviously want it to look good. Anyone have any ideas of how to make the mini look cool but ghostly?

The attached image is the mini sitting in the Mustang cockpit.
Posted by Unknown at Monday, February 21, 2011 3 comments: